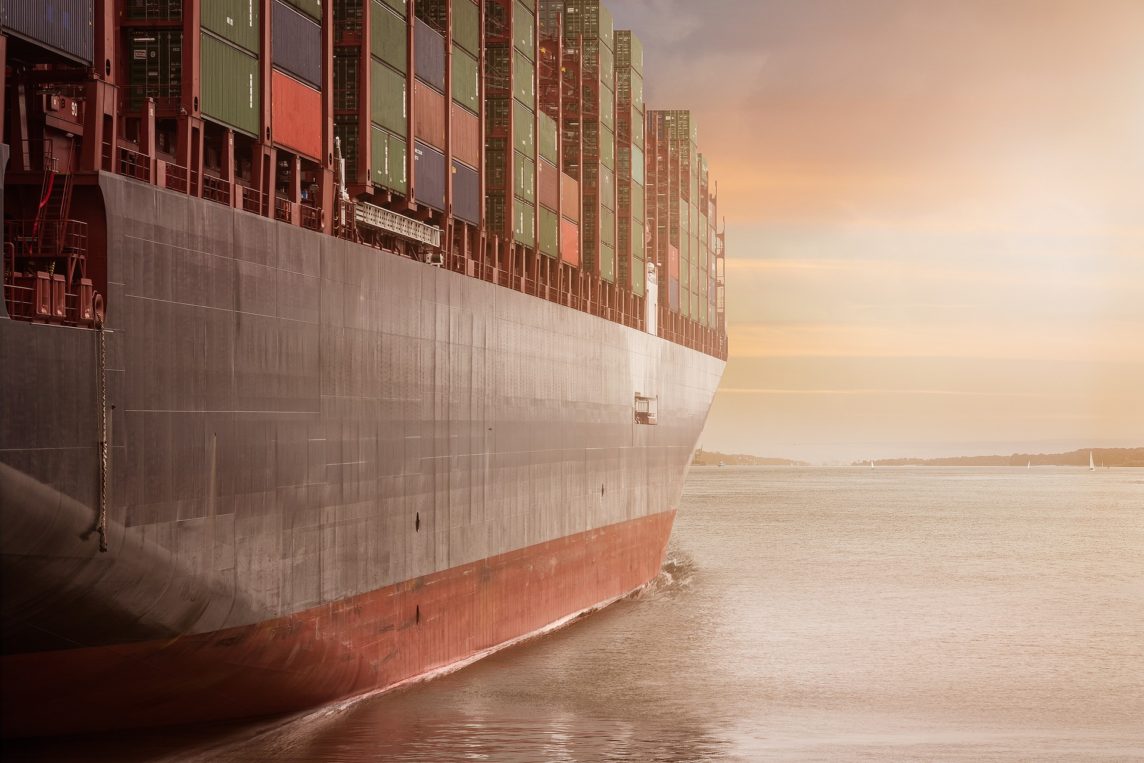 There’s more to these steel boxes that we sell than four walls and the space they offer for storage. We looked around our warehouse and our archives to find some surprising stats about our containers. Here are some things you didn’t know about shipping containers:

Do you know any interesting container facts? Share your stats with us in the comments and we’ll add them to our list!

Quality Containers, Inc. specializes in building containers for purchase, lease, or rent. Looking to buy a shipping container? Call us today to talk with a container expert and we’ll find you what you need. 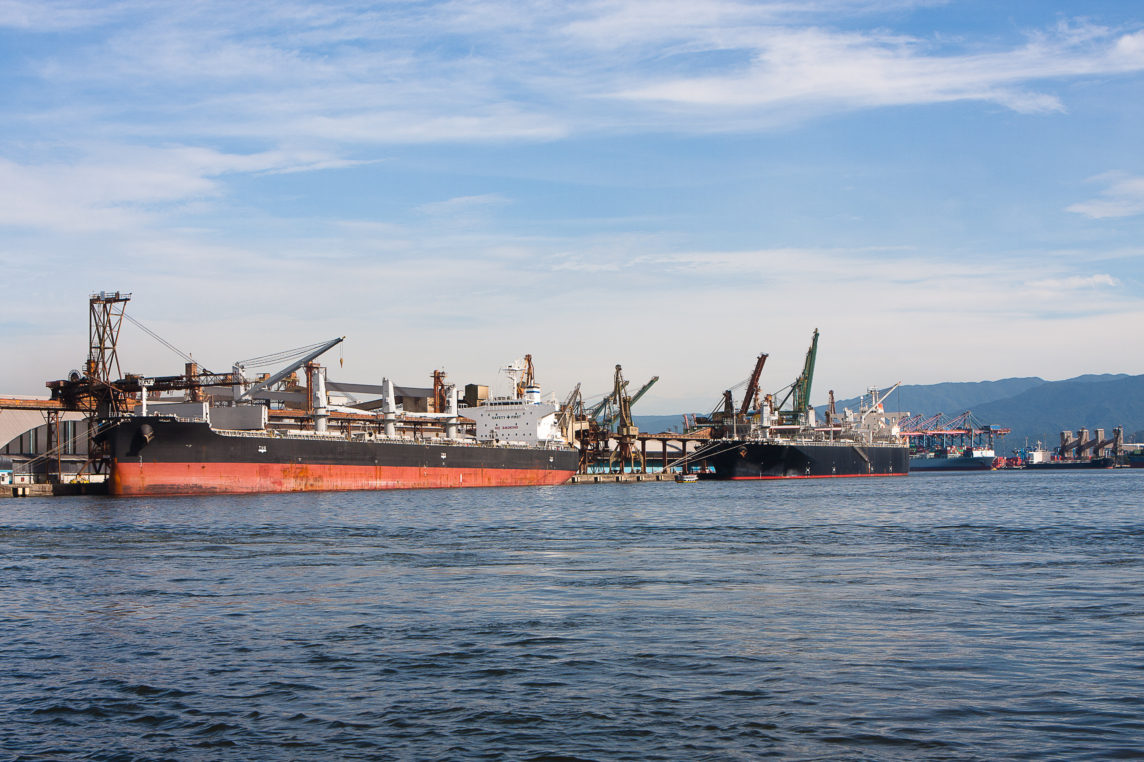 Following a Shipping Container’s Path Around the Globe

Every day, thousands of ships, planes, and trucks crisscross the globe, moving cargo to the people who need it to do business, build empires, or just store their stuff. Global trade and smooth transport were two of the primary factors that pushed the global economy and standard of living forward so quickly during the twentieth century.

The BBC followed a shipping container’s path around the world to demonstrate the reality of globalization. The box began its travels empty and was filled with different types of cargo throughout the course of its journey. The container was loaded, unloaded, and reloaded with new contents when it reached different destinations. The box traveled more than 50,000 miles in its year-long journey before reaching its final destination. We’re going to take you on a trip around the globe to see exactly where BBC’s shipping container traveled. The container’s trip lasted just over a year and traveled on the road, by train, and across the ocean. Follow along with us! The journey begins now. 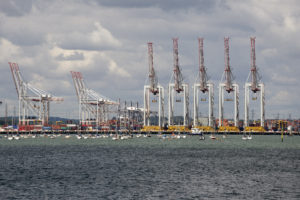 Shipping containers at the Port of Southampton

The empty shipping container is ready to depart in BBC’s home country, the United Kingdom. It passes through most of the United Kingdom and briefly visits eastern Ireland. The container spends about a month winding through the British Isles, on ships and transporters, before it is ready to depart into the Atlantic Ocean – now holding cargo like aged Scotch whisky exports – and move past the Bay of Biscay. The shipping container is ready to say farewell to Europe after curving around the western coast of continental Europe, passing Spain and Portugal. 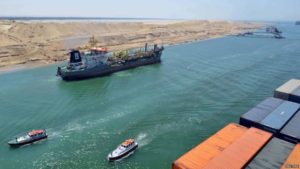 The steel box sails through the straits of Gibraltar, past Southern Spain, Morocco, and Tunisia, and there are no further reports or updates until the container arrives in Egypt. The ship passes through the Suez Canal, a key point in global transportation which has become an ocean highway for transportation, according to BBC.

The container travels south through the Red Sea, passing Saudi Arabia, Sudan, Ethiopia, and Yemen. It continues to float on across the northern Indian Ocean,  until it arrives in Singapore. 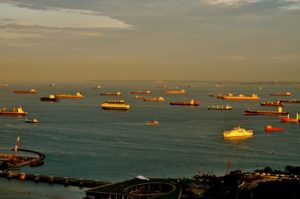 Shipping containers float through the Port of Singapore.

The shipping container passes by Sri Lanka and then arrives in Singapore. BBC reports this location as a loading and unloading zone for other containers. The container then moves to travel through the South China Sea, passing the Philippines and Taiwan, and surviving typhoons. It is ready to be unloaded when it reaches Shanghai, with more than 10,000 miles traveled by sea so far. Apparel replaces the whisky that ‘s now being distributed to bars in Shanghai and the container is ready to explore the Pacific Ocean. After two brief stops on Japan’s west coast and a day in Tokyo, the ship sets sail for the United States! 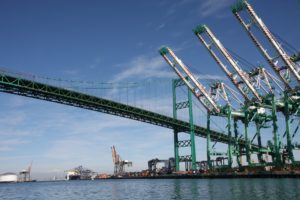 Shipping containers at a busy Port of Long Beach.

Twelve days later, the BBC container arrived in Los Angeles, greeted by economic hardship. The box travels out of California, across the western United States following I-40 through Arizona, New Mexico, and northern Texas. It continues its trip through Oklahoma, Kansas, and Missouri, before arriving in Chicago, Illinois. Over the next two days, the box traveled through Indiana, Ohio, and Pennsylvania before arriving in New York and being loaded onto a new cargo ship. 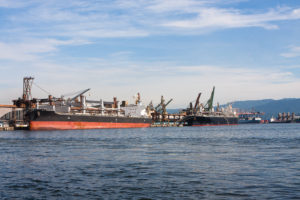 The Port of Santos in Brazil is the busiest port in Latin America for containers.

The container heads out of U.S. territory, making a weeklong journey south through the Atlantic Ocean to make its way to the Caribbean Sea, before porting in Santo Domingo, Dominican Republic and moving on to South America. The BBC box voyaged to Puerto Cabello, Venezuela and then hugged the eastern coast of the continent before porting in Brazil’s largest city, Sao Paulo. The container spends nearly two months in Sao Paulo before departing once more across the Atlantic to return to the South China Sea trade zone. 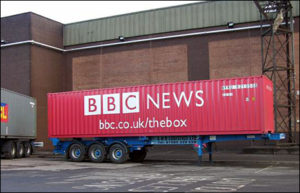 The container traveled through the Indian Ocean once more, making a short stop in Hong Kong and a longer stop – four months long! – in Tokyo. After departing Tokyo, the container made a stop in Thailand en route to Singapore (again) to deliver its final shipment. After leaving Singapore, the container made its way back to the BBC Television Centre in London, England.

In total, the container traveled about 50,000 miles and visited 25 ports over the course of 14 months. In some cases, it traveled a thousand miles in a few days. In other cases, the box sat idle for months at a time. Once the shipping container’s travels came to an end, it was sent to Africa to be converted into a soup kitchen.

We hope you enjoyed our journey following a shipping container’s path around the world! Contact us to house your cargo as it travels across the map – we have a variety of sizes and grades available to fit your cargo needs. 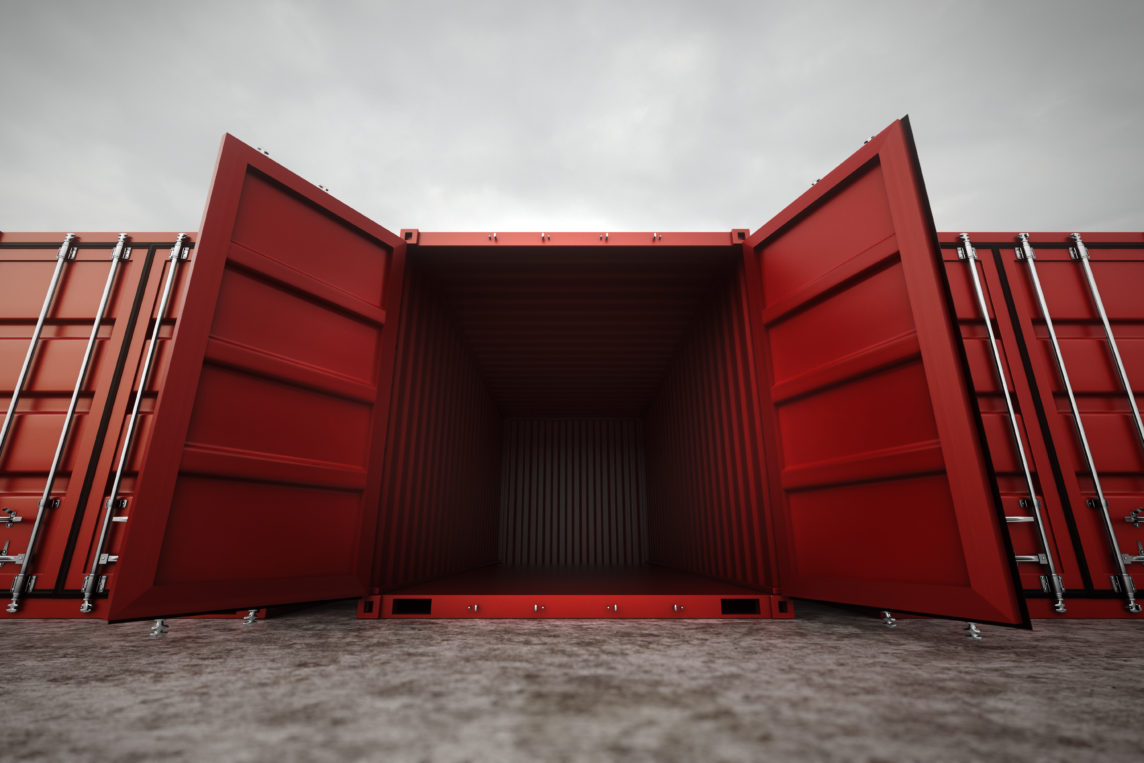 Tips for Storing a Shipping Container in Humid Climates

With the summer months marching on, delivering unrelenting heat, it’s important to consider how rising temperatures will affect your shipping container storage needs. Are you storing heat-sensitive cosmetic items that could easily be affected by the weather? Or perishables, like food and drinks, that could be ruined with one bad day of sizzling heat? Here are our tips for storing in humid climates.

Insulation works to keep your shipping container cool during warmer months. Here in California, where Quality Containers is headquartered, our temperatures have been reaching close to triple digits on most days. The heat could affect the items in your container regardless of your location. Insulation is an effective way to keep temperatures from rising and to protect your stored items because it creates a barrier to seal air. Most use spray polyurethane foam (SPF) to insulate their container and keep things cool in their steel box. Make sure you take safety precautions after insulation is complete; it’s a chemical substance and you will need to wait a while before entering your container.

Ventilation is a useful way to remove warm and moist air is through ventilation. This is essential if you want to build a home or office with your shipping container. You don’t need to be building a house to use ventilation, though. This will help air circulate throughout the container instead of allowing it to trap heat inside. Ventilation can be installed underneath your shipping container to easily allow air to flow through.

Dehumidifiers are ideal for long-term storage and help reduce moisture in your container. A dehumidifier may require more work than ventilation and insulation because you’ll have to keep an eye on it. Since a dehumidifier collects moisture from the air, you’ll need to empty the reservoir once it’s full – just make sure you don’t drink it! You can also set up it up to be emptied through your plumbing if this would be a more effective method for you.

Desiccants are a different way to absorb moisture and maintain dryness in your container. There are different types of desiccants that absorb moisture and water and they are effective in colder climates as well. The most commonly known desiccants are silica gel packets, which can be found in most sealed products we purchase. There’s also calcium sulfate, calcium chloride, and charcoal to prevent moisture from turning into liquid to keep your items safe and unaffected by temperature. You want to ensure that you have enough desiccants inside the container and may also need some outside of it to work for the duration you are using the container for storage.

Cargo worthy shipping containers are ideal for storage and we can help you get your next one. We provide an excellent product at a fair price with outstanding customer service. Get in touch with us and we’ll get you what you need. We’ve got you covered. 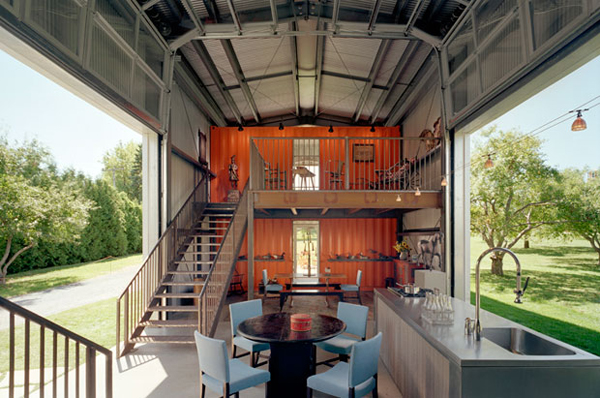 A shipping container’s purpose is not merely for storage. Small businesses are using shipping containers to build their facilities in a sustainable and inexpensive way, while expanding their location base. Price can vary depending on the size of your business and your business’s needs, but they are cost effective when compared to traditional building practices. They also take less time to build than traditional business spaces, which can be an important factor in increasing your visibility as a small business.

Shipping container restaurants have started popping up after larger, household name businesses have built with them and increased their popularity. It is especially common among smaller restaurants that create bar seating and can use outdoor space to set up tables for their customers. A shipping container’s size allows restaurants to build their facilities almost anywhere they desire, making it easier to control costs and increase profits.

Some stores only appear during certain times in the year, such as 4th of July or Halloween, and can easily sell out of a modified shipping container. Other smaller retailers are using shipping containers to build small stores to do business and some create pop up shops so they can move their business wherever they please, which can be an effective tactic to boost sales.

It may be difficult to find an affordable office space as a small business, especially because renting expenses may not always be in line with your budget. Shipping containers provide a way to create office space without breaking a small business budget. It helps business owners who are looking to make a profit and not spend all their money on rent and the various expenses paired with owning a business. Shipping containers are also ideal for additional storage, workshops, and sheds to create your unique space for whichever type of business you are in.

Recycled shipping containers are an inexpensive way to build music and video production studios – or any type of studio for that matter. There has been an increase of creativity with these boxes when it comes to the work-from-home crowd. These businesses are doing it right with sustainable practices and affordability. Why not build your studio at your home? Studios are also a great space for those that need space for their hobbies, especially if you want to build a music studio to mix on the weekends or a craft studio to channel your inner artiste.

Get in touch with us about buying your next shipping container whether it is for storage, creating your next business location, or fostering a home for your hobby.

Welcome to WordPress. This is your first post. Edit or delete it, then start blogging!

Quality Containers was founded on a simple principle. If we could provide an excellent product at a fair price and compliment that product with outstanding customer service, we have a winning model. That is our core operating principle and we haven't looked back since.